I love my online business but hate working alone – HELP! 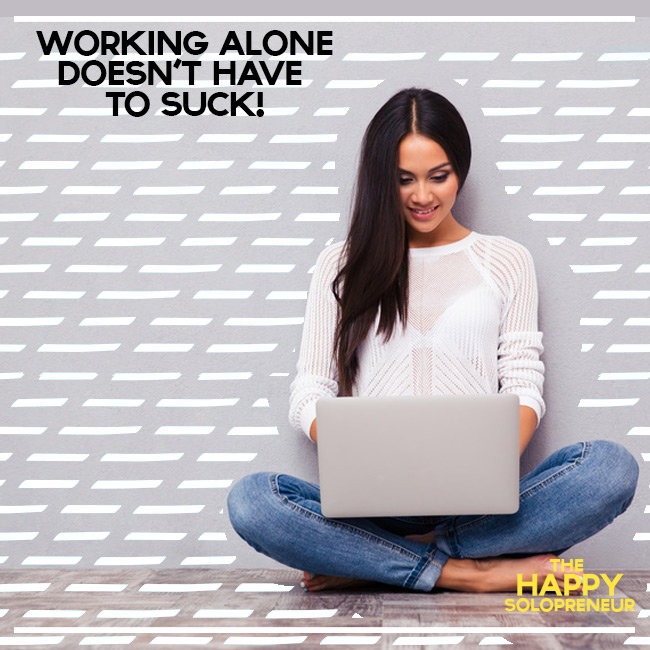 Introverts have been getting a ton of attention on the Internet lately (is that irony or…?).

It seems like every time I log onto Facebook, I see another article that lists out the traits of Innies and why we need to respect their needs for dark rooms and silence.  While I know many people identify as Introverts, I also think many people jump on the bandwagon because, let’s be real, people can just be extra annoying and grate our nerves. You fantasize over the solace of a Walden-esque style life, and before you know it, want nothing more than to be a hermit behind your computer. Insert: quit job and become a solopreneur.

If you’re feeling alone, make sure you don’t get stuck in that mode!

That happened to me. After working “normal” jobs for 5 years, I found myself so worn down from interacting with the spectrum of irritating co-workers that I just knew I’d be so much happier working from home, in silence, with my coffee and computer. Until I wasn’t. I learned a lot about myself in the first few months of solopreneuring, but one of the most surprising self-discoveries was that I actually missed people. Not their loud chewing or random question asking, but just the general buzz and energy felt from other people being productive(ish) around me. I felt lonely and craved actual interaction instead of social media pleasantries, and I seriously doubted my ability to sustain my solopreneurship when I wanted to be around living, breathing people again. You probably feel this way if you identify as an extrovert, too.  Here’s what fixed this problem and created balance for being alone and being social to once again make me a happy solopreneur:

1.   I enlisted an accountability partner.
Every Monday, I interact with my accountability partner. We have a running list of our goals and to-do’s, and updating our progress on a weekly basis has 1. saved me from the black hole of not getting work done and 2. reminded me I’m not alone. It feels awesome to know someone else is hustling like you but also invested in your success. And while we e-mail each other our updates, we also talk on the phone. This adds in scheduled socializing that is equal parts productive and warm + fuzzy. Winning!

2.   I started working in alternate locations.
I realized that it made me more productive to take one or two days out of my workweek and work at a different “office.” You know where has free Wifi? Pretty much everywhere. They want you to buy their coffee and scones, solopreneurs. Take advantage of the Internet hookup and give yourself a break from your couch in a coffee shop, café, library, or other spot where you can both plug in to your work and plug in to the good vibes around you (loud chewers excluded). I’ve also been known to drive somewhere an hour away in order to change up my scenery and the monotony of a routine. A little day trippin’ never hurt someone who needs fresh inspo!

3.   I embraced video conferencing.
This could be a “just me” thing, but video conferencing was never my favorite. I didn’t even like to Skype with my family while I was overseas. But, it is a great way to combat loneliness when you primarily do your job alone. It puts you in touch with a person without the need to leave your space, and it might even get you out of your pajamas. Seriously though, scheduling a video conference on a periodic basis will give you that burst of interaction you need to not feel so isolated behind your screen. Give it a try!

4. I attended networking events and promotional outings.
The thought of passing out business cards and pitching my business used to feel majorly fake for me. I don’t love chitchat or small talk, so networking seemed like a chore. But, I realized that this actually is a fantastic way to meet like-minded peeps and make business connections that can help my business grow. Also, now that I know I actually like people (in small doses), it nourishes my need for interaction. Look up small business networking groups, Meet Ups, or even trade shows near you to mingle and spread your happy!

Being lonely or missing people while you’re trying to hammer out work goals can really dent your productivity and overall sense of well-being. If you’re feeling alone or frustrated, make sure you do something to intervene so you don’t get stuck in that mode! What else have you done to fuel your social needs while being a solopreneur?

This website uses cookies to improve your experience while you navigate through the website. Out of these cookies, the cookies that are categorized as necessary are stored on your browser as they are essential for the working of basic functionalities of the website. We also use third-party cookies that help us analyze and understand how you use this website. These cookies will be stored in your browser only with your consent. You also have the option to opt-out of these cookies. But opting out of some of these cookies may have an effect on your browsing experience.
Necessary Always Enabled
Necessary cookies are absolutely essential for the website to function properly. This category only includes cookies that ensures basic functionalities and security features of the website. These cookies do not store any personal information.
Non-necessary
Any cookies that may not be particularly necessary for the website to function and is used specifically to collect user personal data via analytics, ads, other embedded contents are termed as non-necessary cookies. It is mandatory to procure user consent prior to running these cookies on your website.
SAVE & ACCEPT